Kuwait and the migratory birds 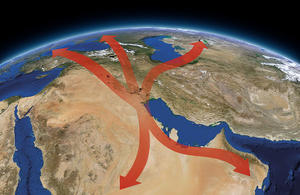 The most prominent feature of Kuwait’s birdlife is migration. Several major bird migration routes connecting three continents intersect at the head of the Gulf. This involves movements by long-distance migrants and also by regional migrants some of which actually spend the winter in Kuwait.

Much remains to be learned about the complete bird migration routes that pass through Kuwait. And this aspect of ornithology is still being actively explored. For many long-distance migrants that breed in northern Eurasia and overwinter in the subtropics the journey is remarkably long and crosses geographical obstacles such as the high ranges of the Caucasus, the Elburz, the Zagros Mountains and the wide expanses of the Black Sea, the Caspian Sea and the Gulf. The Arabian Desert is still another barrier – a sea of sand and rock inhospitable to most migrating birds. 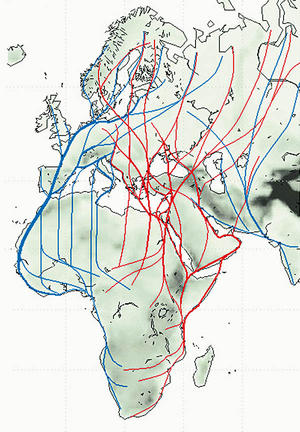 Each bird species may have a different migration route and different movement behaviour, so generalizing about migration pathways is problematic. Pathways may also not be precise thoroughfares but rather broad fronts. Conventional knowledge from initial observations in Kuwait and the surrounding region show the following two important routes for long-distance migrants that undergo a mass migration to breed in the temperate Eurasia and return to winter in the tropics. First, the Eastern Flyway is an important Central Eurasian migration route that runs east of the Caspian Sea and Elburz Mountains then southwestward through passes in the Zagros across Kuwait and the Arabian Peninsula into eastern and central Africa via the Bab Al-Mandab straits. Many raptors such as eagles, falcons, harriers, and buzzards take this route.

Another important route passes through Kuwait, coming from Eastern Europe along the Tigris-Euphrates valleys of Turkey and Iraq, across the head of the Gulf eastward along the western edge of the Zagros Mountains to Pakistan and India. Some songbirds take this route. Many birds also come from the Eurasian arctic and tundra to over-winter in the Gulf or other parts of the Indian Ocean shores and pass through Kuwait as well. For many northern birds, the water bodies are not barriers but the Arabian Desert definitely is, so they keep to the coast. Some northern species, even hardy ones such as swans, geese and ducks, may be obliged to travel further south than usual in seasons of severe winter weather. For many of these northern waterfowl the Mesopotamian Delta (including Kuwait Bay) is the southernmost place they’re prepared to go. This accounts for the sporadic, rare occurrences of so many colourful waterfowl in some winters. Kuwait is in fact one of the only Arabian countries that regularly gets to see northern birds such as these.