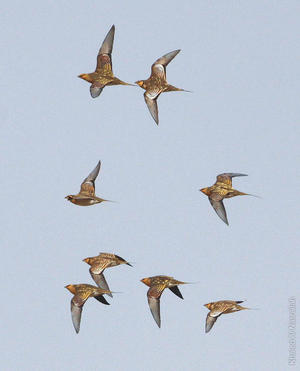 Many of Kuwait’s birds are rare because they occur here as vagrants or they have a very restricted global range and/or have very small global populations. Some parts of Kuwait remain poorly explored, having extremely restricted access controlled by the Military, Coast Guard and Police. Other areas of farmland and industry also have restricted access. Nonetheless, the list of the country’s birds has been rising, as birders monitor the country in more systematic ways and explore more areas in-depth. Birders today often document rarities with a camera, or after finding a bird they can call a helpful photographer in. If you do see a rare bird – one that is listed as a vagrant in this book- do the following to record it for the Kuwait Ornithological Rarities Committee (KORC):

What is a vagrant?

A bird is considered a vagrant if it strays far outside its expected range. A key criterion in defining a vagrant is the distance from its normal breeding, wintering, and migratory distribution. Usually a species that is just barely outside its normal range is not considered a vagrant. In the Gulf States, establishing what is or not a vagrant is sometimes difficult, since so little is known about many birds’ normal distribution within the wider region.

Moreover not everyone agrees on the use of the term vagrant with regard to irregularly occurring species. To be fair, it’s important to track the history of occurrence of a species in the wider regional level rather than base the notion of vagrancy on recent occurrence records solely within the country. Also in desert and semi-arid biomes it is common for bird populations to fluctuate in such a manner that they may be absent from a certain locality for many years, even decades. Furthermore certain “rare” species on the decline may be currently absent or extremely rare transients to the country because their regional populations are very low and localized - but that does not mean they are true “vagrants” from somewhere far-off. In this book the term “extremely rare vagrant” is arbitrarily used primarily for birds that have been recorded less than 5 times in this country. Although irregularly occurring species that have occurred only a few times (i.e. 6 -15 records) are also noted as vagrants, they could in fact be rare transients to the country. These “vagrant” species may include endangered species that are in decline in the wider region. As our knowledge of the bird’s frequency of occurrence grows, many so-called vagrants may actually be re-defined as rare or scarce transients.