Humankind has always tried to name animals. In modern times this process is called taxonomy; it is a formal biological classification. Birds are classified according to estimates of the closeness of their ancestral relationships. These estimates are based on anatomy, biochemistry and even on the species’ behavioral traits, such as their vocalizations. Birds within a single species will generally look and act in a similar manner and be genetically similar also. However, in some cases birds that look similar may be genetically different, and this is creating much debate and change in their taxonomy and names. As the technology and tools to assess genetic dissimilarities expands, new views of species taxonomy are defined and this is bringing about a wave of name changes. So today it is important to understand the basics of taxonomy and follow the officially designated and updated checklists. 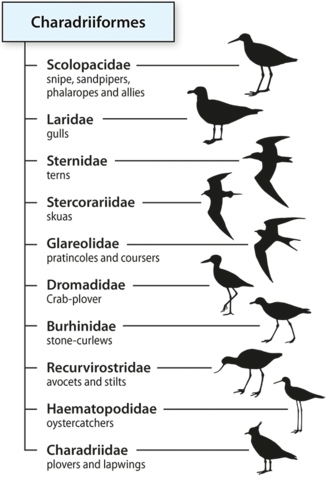 Names are important – they are recognizable mental tags we officially give each species. To really know the birds, you must know their names. In a deeper sense, knowledge of the bird names and their relationship within related groups of birds imparts a consciousness of nature’s complexity and harmony.

Species are also set in a taxonomic hierarchy –categorized in rank ranging from order, family, genus, to species. Species are the endpoints within this classification hierarchy. Thus two species of gulls may be closely related and this is shown by the fact that they are placed in the same genus, for example Larus fuscus and Larus cachinnans. All gulls and terns, constituting several genera (the plural of genus), belong to a single family. In this case it is the gull family, Laridae. This family belongs to a higher grouping, an order, which includes all waders, the Charadriiformes. And finally all the bird orders are under the Class Aves, the birds. For example, the Baltic Gull is scientifically described as follows:

Distinct populations of birds that belong to the same species but differ consistently both in looks and genetic makeup are traditionally called subspecies or ‘races’. These local geographic varieties are usually distinct enough to be distinguished in the field. Many taxonomists today are attempting to make nomenclature neat and tidy by slowly doing away with the subspecies taxonomic level, and this is why more name changes are bound to take place in the coming years. As taxonomic research continues, subspecies will either tend to be “split” into distinct species or “lumped” within species, but differentiated as local populations. In birds, subspecies may commonly interbreed and can show an integration of characters where their breeding ranges overlap; yet true species rarely hybridize in the wild. Birders however usually recognize the local geographical variation in bird populations and identify prominent subspecies. They understand that taxonomically a new species may emerge from what is now considered a subspecies!

A subspecies’ scientific name is signified by using three words; for example the nominate form of the Baltic Gull is Larus fuscus fuscus (often depicted simply as Larus fuscus). Formerly one of its subspecies was called Larus fuscus heuglini – this is now called Heuglin’s Gull (Larus heuglini) by some authorities since it was recently split by taxonomists into a distinct species. In this book we try to focus on providing authorized birds’ names to the species level; however, we also provide several distinctive subspecies names as well. Nature is inherently diverse, there is a lot of variation and it is not inconsistent to depict some birds at both nominate species and subspecies level.

Recent advances in taxonomic methods and naming conventions have brought sweeping changes in scientific and also in the standardized English names. English names are widely used in the Middle East because many of the birds found here are also found in Europe where modern naming conventions were first established. Here in Kuwait we follow the taxonomy guidelines set by OSME (Ornithological Society of the Middle East, Caucasus and Central Asia). Most modern field guides which assist in field identification also follow these guidelines, and this is very important for standardising names for communication and conservation.